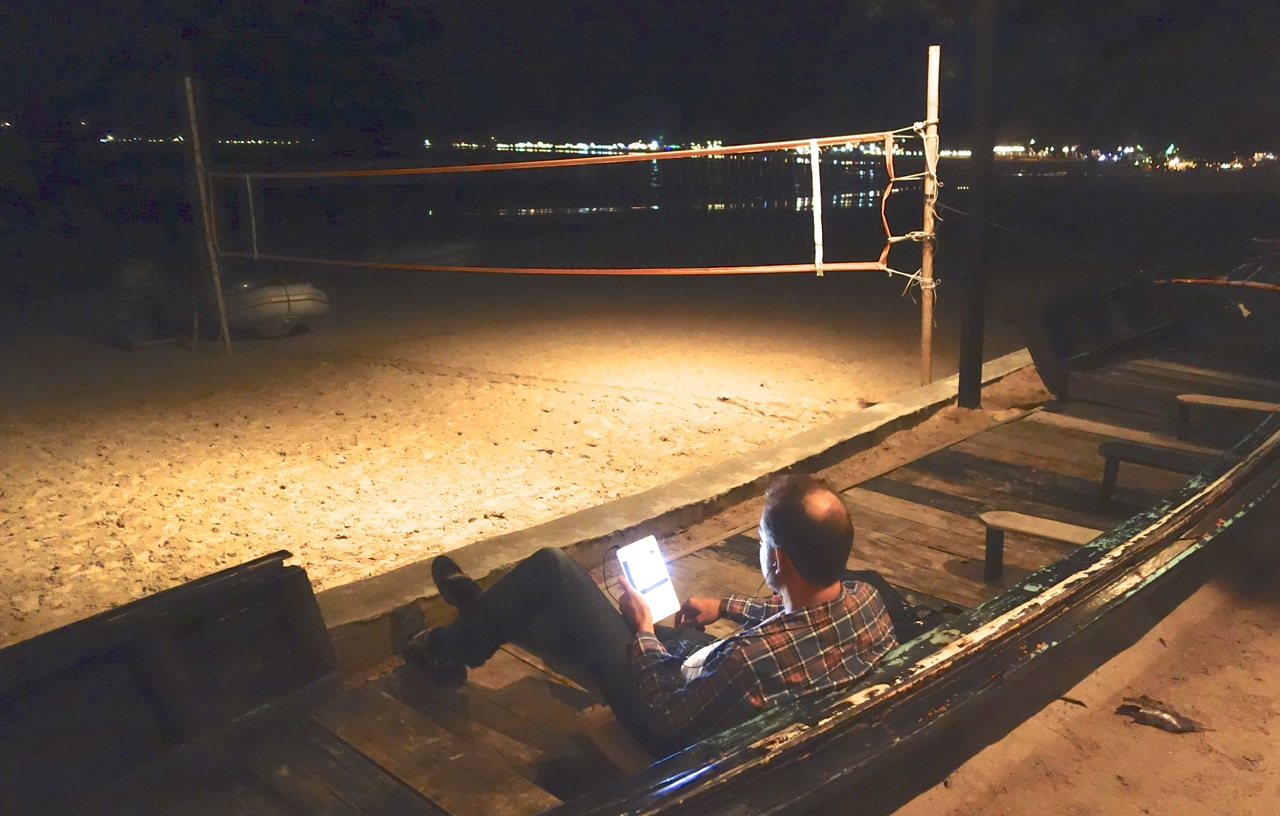 We like experimenting with geeky tools. All in the name of science of course…

How about sitting on a beach in Thailand and participating in conference in Stockholm by remote-controlling an ipad on a stick on wheels? Sounds like a fun experiment, doesn’t it? How many geek points is that?

And hey, I just happen to be on an island in Thailand right now, and there’s this cool event Lean Tribe Gathering happening at the Spotify Stockholm office, and I recently bought a double. I saw one of those things driving around the office a few months ago, and it instantly popped to the top of my must-try-someday list.

So what was the hypothesis? I’ve heard that it’s only an experiment if you have a hypothesis. Otherwise it’s just playing around, and I wouldn’t want to be accused of that would I?

The conference was an evening of lightning talks and open space (= big room with lots of mingling and small groups of informal conversations, like a cocktail party under the guise of a conference). Will I hear and see the presentations? Will I be able to roll around and freely participate in the open space? Will I feel like I’m really there?

So my hypothesis was: “I can fully participate in this conference using a double”.

So how did it work out?

It worked! The hypothesis was falsified, unfortunately, but it was still really cool! I sat on the beach near a restaurant with good connectivity, pulled out my ipad, logged on to my double in Stockholm, and started driving around and talking to people. Geek heaven!

Alone on a dark beach because it got rather late. +6 hrs time difference.

The controls were a bit clumsy, and my internet connection was a bit shaky. But I could get around fine, slowly, and I was able to make it to the front of the room right by the stage.

For the lightning talks I could see and hear the speakers fine (they had mics), and I could make out about half of the slides (depending on colors used, font size, etc). All in all I got the presenter’s message. But I didn’t need a double for that, someone could have put a laptop on a chair and connected me via skype/hangout. On the other hand, it was nice to be able to “turn my head” from time to time, to follow the speaker’s movements, or see the audience and the room.

Mingling in the open space

The open space part was really fascinating. Driving around this… thing…. and feeling like I’m really there. Weird.

However, although it was fun and cool, in practice it didn’t really work that well because of the background chatter. I could roll up to a group of people, but I could only pick out about 20% of what was being said, because of all the other discussion happening around me. Also, the ipad speakers are too weak for this kind of situation, people could only hear me speak if they bent down and put their head really close. So I felt more like an observer than a participant.

At one point I joined a smaller group (4 people) sitting a bit further off, away from the main chatter.  That worked perfectly, I could join the group and really be part of the conversation.

The cool thing is that I was really there. I mean that thing rolling around was ME! On one hand I was like “wow, awesome, I teleported to Stockholm and shapeshifted along the way!”. A true out-of-body experience. On the other I hand I was like “HELP! I’m stuck inside this thing! My body has become and ipad on a stick on wheels!”.

I had the distinct sensation of “Wow, so this is what it’s like being a drunk tetraplegic with bad hearing and a weak voice.”

Tetraplegic, because I’m effectively paralyzed from the neck down – the double doesn’t even have legs or arms. I could see and hear, and I could roll around like in a wheelchair. But slowly and carefully, and I sometimes needed assistance when things got in the way. Sometimes I got assistance, even when I didn’t need it, which felt both good and bad at the same time. Gradually people noticed that I could get around quite nicely myself, with some patience. I can’t turn my head, but I can turn my whole vehicle from side to side to see what’s going on. Of course, I don’t know what it’s really like to be a tetraplegic but I guess it’s probably something like this.

Drunk, because that thing sways quite often to stay in balance, and sometimes bumps into things or trips on small objects and falls flat on it’s face (happened only once, but it felt horrible).

Bad hearing and weak voice, because of the background noise in combination with my rather limited microphone and speaker. I often couldn’t follow the conversation going on, and people had to lean in close to hear what I was saying.

Another interesting thing. Sometimes when I rolled up to a group of people, they stopped talking and stared at me instead. As if I was some kind of object (and maybe I was…. or maybe not? Any philosophers out there?). Lots of smiles and laughs of course, and the occasional shocked surprised as someone realized that “hey, there’s a person inside that thing!”. In some cases I felt more like a comic relief than a true conference participant. While listening in on a conversation (well, trying…) I sometimes noticed people staring at me, and they couldn’t see that I was staring right back at them. A weird feeling of eye contact and, well, not.

Although, I admit, it was quite fun to sometimes bump into people and see them shriek in surprise at being accosted by an ipad on a stick on wheels, with a grinning guy on the screen. Even earned me a kiss on the cheek once. Or at least that’s what I think she was doing. It wasn’t a slap at least, I don’t think.

I asked one guy for some coffee, and he almost did, until he realized what he was talking to :o)

Running out of batteries

Unfortunately the ipad on the double wasn’t fully charged from start, so it started running low quite quickly. I didn’t want to disrupt the ongoing presentation, so I tweeted for help, and someone kindly plugged me in.

During a break, I logged off to make it charge faster (which it didn’t). Then later, when logging in again, I found myself standing a few meters away from the nearest person. I wanted to be unplugged so I could move around! Heeeeelp! but nobody could hear me! Now what? I guess I could tweet again, but it might take a while for someone to react.

Ah, I could display a message on my screen! But how? The app on my end will only send the video stream, i.e. my face on the camera. I can’t get it to display something else. Ah, I could write a note! But darn, I’m sitting on a beach in Thailand and no paper or pen nearby.

Then I realized that I had my laptop with me (as backup solution). So I fired up textedit and wrote a message

I made the font huge (as in covering the whole screen), and pointed my ipad cam at it. And moved it back and forth a bit for effect (causing the text to pulsate). That worked! People at the conference saw the message quickly and unplugged me.

The charger didn’t work though, so I was still at about 10%. I figured I’d just participate as long as I could, and the battery would die when it died. That was also a weird feeling, knowing that at any moment I will “die”, my double will go limp, and I’ll suddenly wake up back on the beach in Thailand. Total Matrix moment! I saw the battery counter go lower and lower, and my minutes were numbered, so I had to make the most of it. Carpe Minutus! Seize the minute!

Features I would love to have:

Oh, and If you’re going to sit on a beach in Thailand in the middle of the night, make sure you have mosquito repellant. And don’t forget the hands! I have like 30 mosquito bites on my hands, I’ll probably get dengue fever or something. But heck, sometimes you have to make sacrifices for science!